When the Dogs Talked (34 min, 2014)
As a group of indigenous adults argue about whether to save their government housing or their sacred lands, their children struggle with how the ancestral Dreaming makes sense in their contemporary lives filled with hip-hop and dinosaur bones. When the Dogs Talked (34 min, 2014) mixes nonfiction and fiction in a thoughtful yet humorous drama about the difficulties indigenous communities have living within the strictures of modern white culture while maintaining a sense of their own traditions and relationship to the land.

The Mermaids, or Aiden in Wonderland (26’29’’, 2018)
In the not so distant future, Europeans can no longer survive for long periods outdoors in a land and seascape poisoned by capitalism, but Indigenous people seem able to. A young indigenous man, Aiden, taken away when he was just a baby to be a part of a medical experiment to save the white race, is released into the world of his family. As he travels with his father and brother across the landscape he confronts two possible futures and pasts. 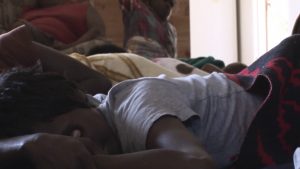 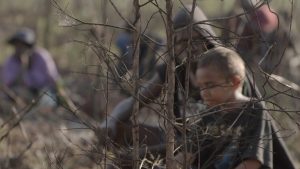 When the Dogs Talked, Karrabing Film Collective, film still. Courtesy of the artists.