Sonic Acts and Stedelijk Museum Amsterdam have been collaborating since 2011 on sound art related projects. In 2017, they initiated a long-term research trajectory dedicated to the lesser-known pioneers of sound art. The first stage of this collaboration activated the archives of American composer and sound artist Maryanne Amacher; the second included a tribute to the work and musical ideas of Martin Bartlett in the commissioned film by Luke Fowler; and the third, in 2018, was an exhibition, new sound piece and performance by the Swedish composer, mathematician, and visual artist, Catherine Christer Hennix. This year, Sonic Acts and Stedelijk continue this trajectory by putting on display works which celebrate revolutionary sounds of Tony Cokes’ video works and the forgotten legacy of Julius Eastman (1940–90), the queer African-American avant-garde composer, pianist, vocalist and conductor, whose piece is featured in the work by The Otolith Group, The Third Part of the Third Measure (2017).

Julius Eastman was the queer African-American avant-garde musician and composer whose ecstatic militant minimalism initiated a black radical aesthetic that revolutionised the East Coast new music scene of the 1970s and 1980s. In January 1980, he was invited by the Music Department at Northwestern University to present his compositions Crazy Nigger, Evil Nigger, and Gay Guerrilla. A number of African-American students and one faculty member objected to the titles, which were eventually redacted from the printed concert programme. Before the concert, on 16 January 1980, Eastman delivered a public statement that responded to these objections. The speeches delivered by Dante Micheaux and Elaine Mitchener in The Otolith Group’s audiovisual composition are based on each performer’s modified verbatim transcriptions of Eastman’s statement. 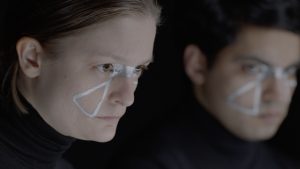 The Third Part of the Third Measure, film still, The Otolith Group. Courtesy of the artist and LUX (London).
A selection of video works by Tony Cokes
22 Feb — 03 Mar Tony Cokes

Evil 66.1: DT.sketch.1.8
2016, 8’, sound
Also called War on Women, this video is a compilation of statements made by Donald Trump concerning relations between men and women. The accumulation of misogynistic quotes originates from Trump’s books and public statements.

Evil.48: fn.kno.it.alls
2012, 6', sound, colour
'So sick of the conservative war on women and reproductive rights in the movement toward the u.s. elections. found a mainstream track to cut against the absurd discourse, then added Whitney Houston into the mix as a memorial.' T. C.

Evil.27: Selma
2011, 9’, sound, colour
A text by the collective Our Literal Speed about the audio documentation of the Civil Right Movement is set to songs by The Smiths. Cokes writes, ‘I wanted to embrace the text’s call to rethink social movements in tandem with shifts in media forms (the movement from radio to television) as potentially reflecting a change in conditions of possibility or imaginative horizons for political action.’

Evil.16: Torture Musik
2011, 17’, sound, colour
The film deploys an article from The Nation on the subject of the use of pop music in ‘enhanced interrogation techniques’, set to a variety of familiar songs.

Face Value, 1—3: Von Trier, Bowie, Kanye
2018, 14’, sound
What was Von Trier up to during his notorious press conference in Cannes? And Bowie when he flirted with fascism? And Kanye West with his megalomania?

Evil.35: Carlin/Owners
2012, 8’, sound, colour
This video juxtaposes music by the postpunk band Gang of Four with a monologue found on YouTube by comedian and social critic George Carlin.

Evil
2003, 11', sound, colour
Evil addresses urban life and mediated representations of capital and capitalism, as well as the popular contemporary usage of the term 'evil'. The video is drawn from Cokes’ installation Shrink, in which he asked several collaborators to shoot a video of the Manhattan skyline from boats trolling New York's waterways. The resulting footage has the blandly impersonal, almost scientific precision of 19th-century panoramas. In this case, what is at once revealed and concealed is the face of American capitalism, global power, and high finance, slowly unscrolling for the viewer: Wall Street, the World Trade Center's Twin Towers, the United Nations. In Evil, Cokes overlays these images with quotations from philosopher Alain Badiou.

Black Celebration
1988, 17’11’’, sound, B&W
In the video Cokes pairs footage from the 1965 riots in Watts, Boston, Detroit, and Newark with text by The Situationist International, Barbara Kruger, Morrissey, and Depeche Mode’s Martin L. Gore, along with music by the industrial band Skinny Puppy. The piece introduces a reading that will contradict received ideas which characterise these riots as criminal or irrational. 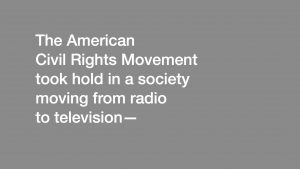 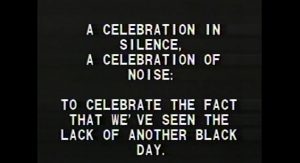 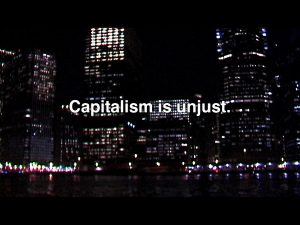 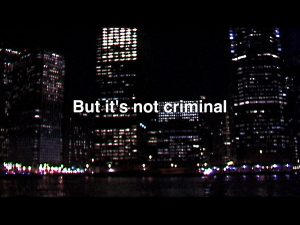 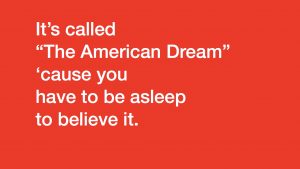