A white laser beam moves over a large surface and draws lines and curves which are only visible for a very short moment before they disappear. But the ray of light leaves traces: the surface is covered with phosphorescent pigment which captures light and then emits a green shimmer which slowly fades out. The simple forms projected in bursts of light from the white laser are layered onto a constantly evolving web of green shimmering lines. Sound programming by David Kiers.
Live performance of Radiant has been commissioned by Sonic Acts as part of Re-Imagine Europe, co-funded by the Creative Europe programme of the European Union. 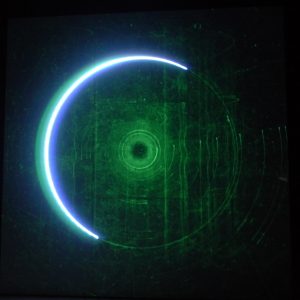