Medium Earth (41 min, 2013) attunes itself to the seismic psyche of the state of California. It listens to its deserts, translates the writing of its stones, and deciphers the calligraphies of its expansion cracks. This audiovisual essay on the millennial time of geology and the infrastructural unconscious of Southern California is focused on the ways in which tectonic forces express themselves in boulder outcrops and the hairline fractures of cast concrete. The desire to evoke the hidden substrata of the planet gives way to a morphological interpretation of the face of the earth. 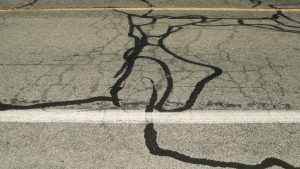