Listening in the Dark

Maeve Brennan’s film Listening in the Dark (44 min, 2018) takes a documentary approach, gathering a series of subtle yet penetrating soundings of human beings’ impact on the natural environment. Undisturbed, and largely unchanged for millions of years, bats’ nocturnal rhythms are being increasingly interrupted by the presence of wind turbines. While noting how such well-intentioned technological developments are affecting the atmosphere in ways we do not always appreciate, Brennan also illuminates how scientific research has revealed a whole sensory dimension that we were previously oblivious to. The film circles around the figure of Donald Griffin, pioneering zoologist and early advocate of animal consciousness, whose researches into bat navigation helped shape our understanding of the concept of echolocation. Following his example, Brennan reminds us, too, of other natural marvels – from the mysteries of animal evolution or the deep historical time of geology – that reveal not only our humbling insignificance in the bigger scheme of things, but also the disproportionate damage we are capable of doing to the planet.

Listening in the Dark was commissioned for the Jerwood/​FVU Awards 2018: Unintended Consequences, a collaboration between Jerwood Charitable Foundation and Film and Video Umbrella. 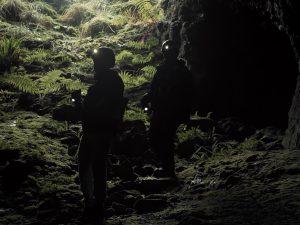 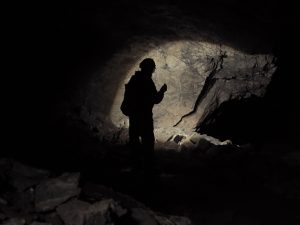 Listening in the Dark, Maeve Brennan, film still. Courtesy of the artist.