In the Present Tense

Accounts of dispossession and resistance, transmission and resilience. (Hi)stories told, (hi)stories heard, in the present tense. The march of the victors refuted in the smallest of gestures and the noblest of speeches. The torrent of the world contained in a look, a voice, a sigh, a place, a memory. Life separating from itself in its telling, opening up to the sense of something different, and the dignity assumed in order to pursue its possibility. This film programme is curated by Stoffel Debuysere.


Humiliated: That Nothing Produced or Touched by Them, Coming From their Hands, Proves Free from the Claim of Some Stranger
Danièle Huillet, Jean-Marie Straub
Italy, France, Germany, 2003, 34 min, colour, video

A continuation and the ending of Operai, contadini (Workers, Peasants), based on Elio Vittorini’s Le donne di Messina (Women of Messina, 1949 – 64), recounting the attempts of a metaphorically ​‘shipwrecked’ group of men and women to construct a new life among the rubble of post-war Italy. In Umiliati Danièle Huillet and Jean-Marie Straub isolate the chapters in which the members of the new-born community are brutally confronted with the outside’s economic and political laws and find themselves being submitted to a tribunal that has no other purpose than their humiliation.
* Umiliati: che niente di fatto o toccato da loro, di uscito dalle mani loro, risultasse esente dal diritto di qualche estraneo

In the Portuguese Alentejo region it is said that, when something is lost, those who are looking should start to walk back to the beginning. Farpões Baldios gives an account of dispossession and occupation, of wastelands that were once part of the commons, of the people who have been living and working on these lands without ever owning them, and of their struggles for justice. Some of the people who sowed carnations and spread resistance in their own words tell their story to the youngsters of today.
* Farpões Baldios 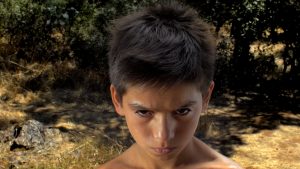 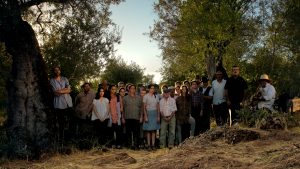