Deformation Studies on Dimension and Structure for Fifteen Point Three

Deformation Studies on Dimension and Structure for Fifteen Point Three is a mediation between the potential of localisation through audio within the Pentacle system, the programming of each modulations of sound according to this capacity, and the acoustic resonances of the Stedelijk Museum. This gradual intervention, whose changes are indeterminately structured, is thought of as an unfolding of an organisation rather than a composition with defined parts. There is no imposition of a specific form, location or movement to pre-recorded audio but the emergence of sonorous events which are specific and non-repeatable

This piece was co-commissioned by Sonic Acts and A4 as part of Re-Imagine Europe, and co-funded by the Creative Europe Programme of the European Union and developed during a residency at STEIM. 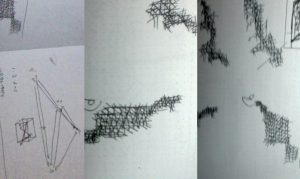