Dick Raaijmakers’ Five Canons (1964–66) deal with fundamental aspects of spatiality of sound, yet the full potential of spatiality was never realised at the time of their production, since that was technically impossible. Johan van Kreij and Kees Tazelaar created an eight-channel version of Canon 1 (1964) for the Composing Spaces Symposium (Institute of Sonology, 2013). That rendering was based on Raaijmakers’ original three tracks.

Each of the three tracks represent an ‘induction series’ and the ‘characters’ derived of those series. Since on these tapes multiple sounds sometimes were bounced together on a single track, it was not always possible to spatialise each sound-character separately. In these cases, spatial movements based on panning were made along two or more speakers as opposed to the steady positions on single loudspeakers of the other sounds. Canon I: Super Augere will be interpreted live on the Acousmonium by Johan van Kreij.

Dick Raaijmakers (1930–2013) was a Dutch composer, theatre maker and theorist. He is known as a pioneer in the field of electronic music and tape music. 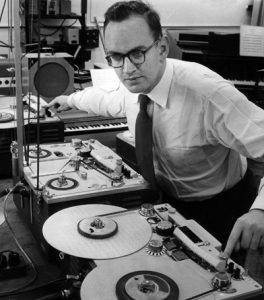