Bring breath to the death of rocks (work in progress)

‘I feel this force that draws me towards the invisible doorway, and it is like a fire burning in my stiffened limbs. So I must walk through the fields of snow… there, to where my resting place is already prepared.’ (Édouard Glissant, Monsieur Toussaint, 1961)

Wandering from a study of the handwritten memoirs of Toussaint Louverture in the French National Archives to the prison cell in the Jura mountains in which they were written, Bring breath to the death of rocks (2018, 34 min) proposes an archaeology of the colonial history of France buried within its landscapes and institutions. Many millions of years ago the Jura was a tropical ocean, as it metamorphosed into the mountain range it is today it left behind large sedimented layers of time, creating the strata that fold along the horizon line. If stratigraphy is the writing of strata, here we have a reading of this strata in which the fossilised history of Louverture can be brought to life through a geologic haunting. The film dramatises the escape of Louverture’s ghost from his castle prison (through the body of a young Haitian researcher) into a form of marronage and errantry within the fields of snow and a dark baroque-like cave. Through historical détournement the past is revisited in order to imagine an alternative future, and in doing so the film offers what Glissant described in the introduction to his play Monsieur Toussaint as ​‘a prophetic vision of the past’. We hear an echo, a spiral retelling. 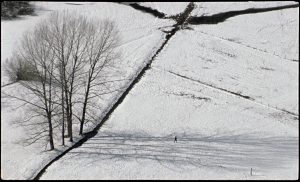 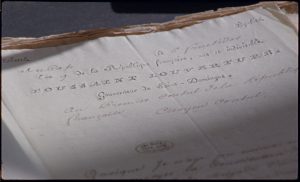 Bring breath to the death of rocks, film still. Courtesy of Louis Henderson and Spectre Productions.