The works exhibited at Arti et Amicitae examine structures of power by collecting traces of Europe’s colonial engagement with East Africa (Emma Wolukau-Wanambwa); reflect on the complicated entanglement of technology and images in constructing the black American identity (Sondra Perry); meditate on the ways in which traumatic events of recent history can be read in – or have been memorialised by – urban or ‘natural’ landscapes, architecture and public space (Cyprien Gaillard); invoke the restless spirit of one of the leaders of the Haitian revolution of 1791, Toussaint Louverture, transporting him back across the ocean from France, where he was imprisoned and died, to Haiti (Louis Henderson and João Polido, with poems by members of The Living and the Dead Ensemble); zoom in the question of the word qur’ān which inspires a score that posits itself as the index and administrator of ‘all potential discourse’ (Rana Hamadeh in collaboration with André Castro).

Interweaving several stories, Nightlife takes place in Cleveland, Los Angeles and Berlin. It opens with a shot of Rodin’s bomb-damaged sculpture The Thinker (1880) in front of the Cleveland Museum of Art. This is followed by an ecstatic dance of non-indigenous juniper bushes, scattered throughout the Los Angeles basin. The third tableau reveals a triumphant firework at Berlin’s Olympiastadion – where the black American track star Jesse Owens won four gold medals at the 1936 Olympic Games. The film then returns to Cleveland, to the oak tree given to the African-American athlete by the Nazi organisers of the Games in honour of his achievements. The soundtrack is a nine-second loop, a dub mix from Alton Ellis’ Black Man’s Word. Originally released in 1969, the lyrics sang, 'I was born a loser'. The song was re-recorded in 1971 when the song’s title was changed and the chorus sang, 'I was born a winner'. Despite being comprised of two time-based mediums – film and music – Nightlife has distinct sculptural qualities. 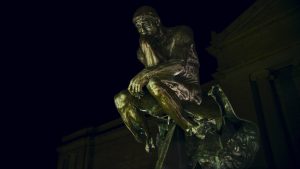 These lowest depths, these deeps is a fragment from Henderson’s extensive film project Ouvertures, a ghost story about the Haitian revolution of 1791 and one of the leaders of the revolution, Toussaint Louverture, who was taken captive by Napoleon’s troops in 1802 and imprisoned in a medieval castle in the French Jura mountains, where he died a year later. This installation – authored by Louis Henderson in collaboration with a sound artist João Polido and fragments of poems written by members of The Living and the Dead Ensemble – depicts a transitional scene across the ocean, returning Louverture’s restless ghost from France to the Caribbean. The sea is the medium for the transmission and transformation of history, language and culture, and the dividing line between the world of the dead and the world of the living. 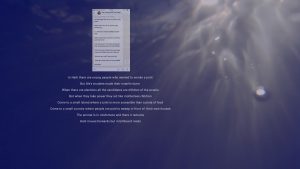 These lowest depths, these deeps, Lous Henderson, film still. Courtesy of the artist.
Lineage for a Multiple-Monitor Workstation: Number One
Sondra Perry

A semi-autobiographical portrait of Sondra Perry’s family on two screens. The family, unrecognisable thanks to chroma-key green balaclavas, poses for a group portrait, buries a flag and peels potatoes. Grandma sings the archaic reggae punk number Guns of Brixton. Unfolding across two screens, with multiple windows open one on top of the other, Perry’s two-channel video digs through the messy and complicated way of constructing one’s identity with images. 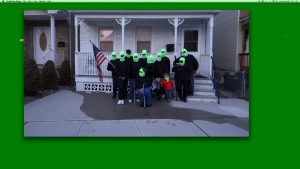 Promised Lands comprises a real-time camcorder recording of a sunset in rural East Africa. The image is overlaid with a chaptered interplay of voice-over and sur-title through which Emma Wolukau-Wanambwa meditates on the differing and unequal processes of human projection that have shaped the narration and hence the possession of this and other post/colonial landscapes. She observes the way knowledge of such histories call her own role into question. 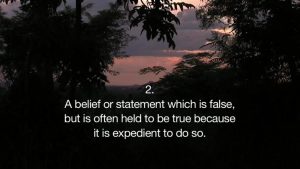 Following The Ten Murders of Josephine – Rana Hamadeh’s first iteration of her unfolding ‘operatic’ practice, which complicates the relations of documentality and ownership – Étude #1 zooms further in on the question of the ‘documental’. The starting point for this composition is based on segments from Qur’anic scripture. In the Arabic language, the word qur’ān can be translated as ‘recitation’ and ‘that which holds the potentiality of recitability’. The Qur'ān – a singling-out of all that can be potentially recitable and the totality of modes with which such a ‘potentiality’ shall be recited – inspires a score that posits itself as the index and the administrator of ‘all potential discourse’. Étude #1: On Recitation has been commissioned by Sonic Acts and is a stepping stone towards a future compositional work by the artist. 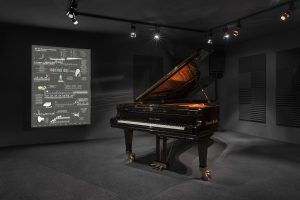