We are proud to share the news that the visual identity for Sonic Acts Festival 2019 has been nominated for the Dutch Design Awards.

‘Seen in its entirety, one of the most powerful overall identities of the past year’ – Dutch Design Awards

The multi-layered visual identity was designed by The Rodina, who took underground infrastructures as a starting point to shape the festival’s HEREAFTER theme: an exploration of major topics such as inequality due to colonisation, immigration and the climate crisis. The identity emphasises what The Rodina regards as two basic principles of design: revealing and hiding.

Nominated in the Communication category, the jury notes that the identity fits seamlessly with Sonic Acts’ appetite for experimentation: ​‘The Rodina uses a multifaceted, inviting visual language that generates curiosity. Well-considered, tasteful and layered, with a passion for detail and implemented with consistency.’ (Dutch Design Awards)

The resulting visual identity has been translated into a wide variety of offline and online resources, including a 320-page publication, and performative interventions that took place at Stedelijk Museum Amsterdam. The beautifully designed HEREAFTER publication, sweatshirts, tote bags and special edition ponchos are available to buy at the Sonic Acts webshop. 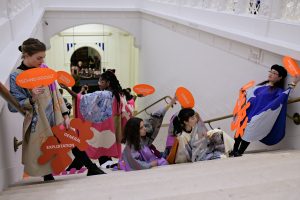