Under the heading HEREAFTER, Sonic Acts presents an expansive exhibition in three acts across three spaces in Amsterdam – Arti et Amicitiae, Vlaams Cultuurhuis de Brakke Grond and Stedelijk Museum – which opened in quick succession in the lead-up to Sonic Acts Festival 2019 (21 – 24 February). Take a look at some photos of the works presented on the Sonic Acts Flickr page.

‘The tension between the seductive images and the violent subjects is tangible from the beginning to the end and the hypnotic music fits perfectly.’ – Het Parool on Cyperien Gaillard’s Nightlife

HEREAFTER aims to explore the genesis of our current crisis – and what happens hereafter – by reflecting on the issues we are forced to confront on a daily basis: the inequalities caused by colonisation and geostrategic manoeuvring, the challenges posed by the climate crisis and immigration, the ever-present exploitation and precarity of the work force, and the way technological advancements disrupts and not emancipates – that is, the gooey mesh of global capitalism.

The first act, at Arti et Amicitiae, includes works that examine structures of power by collecting traces of Europe’s colonial engagement with East Africa (Emma Wolukau-Wanambwa); reflect on the complicated entanglement of technology and images in constructing the black American identity (Sondra Perry); meditate on the ways in which traumatic events of recent history can be read in – or have been memorialised by – urban or ​‘natural’ landscapes, architecture and public space (Cyprien Gaillard); invoke the restless spirit of one of the leaders of the Haitian revolution of 1791, Toussaint Louverture, transporting him back across the ocean from France, where he was imprisoned and died, to Haiti (Louis Henderson and João Polido, with poems by members of The Living and the Dead Ensemble); zoom in the question of the word qur’ān which inspires a score that posits itself as the index and administrator of ​‘all potential discourse’ (Rana Hamadeh in collaboration with André Castro).

The second chapter of the exhibition, in collaboration with De Brakke Grond, could be fitted with a subtitle Reimagined Territories. The works presented reimagine terrains scarred by man-made industrialization in the California’s Imperial Valley (Lukas Marxt); reconfigure the strategic geopolitical area of the Russian-Norwegian border area, which is undergoing catastrophic effects of climate change while featuring a prominent role in the industrial and military Northward expansion (Alexis Destoop); or try to think differently about the 2011 tsunami and nuclear disaster in Fukushima through transformations or mutations of the body (Ana Vaz). The works presented show us the impact of humankind on the environment, but also communities affected by exploitation and oppression, which is aimed at the people living on the geostrategic lands or on the pathways of the grand Enlightenment project (Ulrike Ottinger). Finally, there is Amsterdam, mapped as a terrain which uncovers the city’s hidden electromagnetic phenomena, its invisible wavelengths and charges (Christina Kubisch).

For the third act of the exhibition, Sonic Acts continues its collaboration with Stedelijk Museum Amsterdam to showcase sound-art related projects. The works on display celebrate the revolutionary sounds of Tony Cokes’ video works and the legacy of Julius Eastman (1940 – 90), the queer African-American avant-garde composer, pianist, vocalist and conductor, whose piece is featured in The Third Part of the Third Measure (2017) by The Otolith Group. The setup at Stedelijk also consists of a special project commemorating 50 years of STEIM Amsterdam – the microTone. 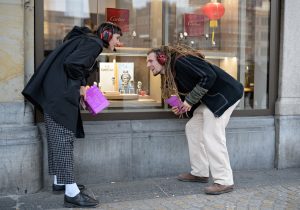 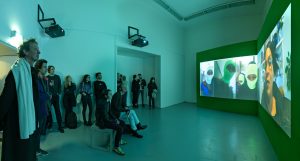 Lineage for a Multiple-Monitor Workstation: Number One by Sondra Perry. Hereafter Exhibition at Arti et Amicitiae. Photo by Pieter Kers. 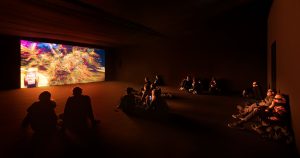 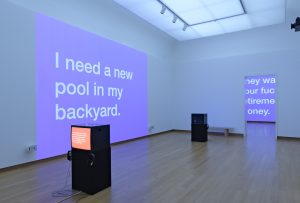 A selection of videoworks by Tony Cokes at Stedelijk Museum. Hereafter Exhibition. Photo by Pieter Kers.