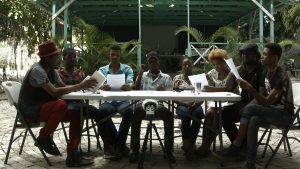 The Living and the Dead Ensemble

The Living and the Dead Ensemble (Léonard Jean Baptiste, Mackenson Bijou, Rossi Jacques Casimir, Dieuvela Cherestal, James Desiris, James Fleurissaint, Louis Henderson, Cynthia Maignan, Olivier Marboeuf, and Mimétik Nèg) is a group of artists from Haiti, France, and the UK. They first gathered in July 2017 for the Monsieur Toussaint Sessions workshop at the Centre d’art in Port-au-Prince, where they were working together on translating Monsieur Toussaint (originally written as a radio play in 1959 by Édouard Glissant, who rewrote it again in 1978 as a play for theatre) from French to Haitian Creole. Focusing on theatre, cinema, poetry, song, slam, and rap, they performed the Kreyòl version of the play in the cemetery of Port-au-Prince as part of the 2017 Ghetto Biennale. Currently they are working on their first feature film.

The Living and the Dead Ensemble. Research (and rehearsals) for the upcoming film on Monsieur Toussaint, 2017. Courtesy of Louis Henderson.