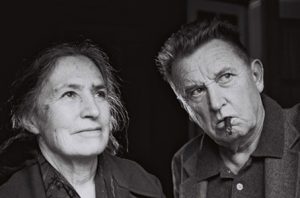 Jean-Marie Straub and Danièle Huillet formed one of the most intense and challenging collaborations in the history of cinema. Straub (b. 1933) and Huillet (1936 – 2006) were inseparable partners from 1954 until Huillet’s death, working intimately from script writing to direction to editing. Straub-Huillet created highly personal film interpretations of stories by Böll, Kafka, Duras, Pavese; poems by Dante, Mallarmé, Hölderlin; a painting by Cézanne, an unfinished opera by Schöenberg; the biography of Johann Sebastian Bach. They sought to make what Straub called ​‘an abstract-pictorial dream’ while remaining rigorously sensitive to the letter and spirit of the text, and to the relationship between sound and image. All of Straub-Huillet’s films are political – advancing a Marxist analysis of capitalism and class struggle or considering ancient and contemporary forms of imperialism, militarism and resistance. They aspire to a revolution in political consciousness, especially among the colonised and the exploited. At 83, Straub continues to make films are committed to the subversion of all forms of cinematic convention, with fragmentary narratives spoken in various languages, Brechtian estrangement, on-location shooting of ancient texts in contemporary settings and a privileging of musical and poetic rhythms over the decorative, the spectacular, the psychological, and the satirical. Dialogue is shorn of emotion, and images are deliberately unflashy.