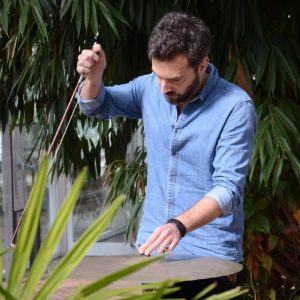 Nuno da Luz is a Portuguese artist whose work circumscribes both aural and visual in the form of performances, installations and printed matter. His work undulates between sonic explorations of place – where resonance and reverberation are inextricably entwined as both echo- and eco-logical processes – and book-making through the publishing collective ATLAS Projectos. Recent projects include performing live ​‘with Assisted Resonance’ for percussion and ambient sound in several venues around the world. Alongside filmmaker Ana Vaz, he’s developing the soundtrack to her upcoming film as The Voyage Out Radio Series: 2222 ∞ 2022, a sonic exploration of her film to come, as a transmission.