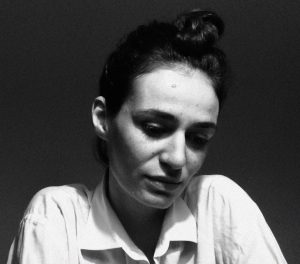 Born in Alentejo in Portugal in 1984, Marta Mateus studied philosophy at Universidade Nova de Lisboa, drawing and photography at Ar​.Co, and music and theatre. She worked as an actress and assistant director. Her first film Farpões Baldios (2017) was premiered at the Quinzaine des Réalisateurs in Cannes and was screened at several festivals such as the New York Film Festival, Viennale, Mar del Plata, Courtisane, and received prizes as the Grand Prix of the Vila do Conde Festival, Grand Prix of the Hiroshima Film Festival and the CAMIRA Prize at the Vérin Festival. Marta Mateus is an artist member of the Casa de Velázquez in 2018 – 19, where she is developing a new film.