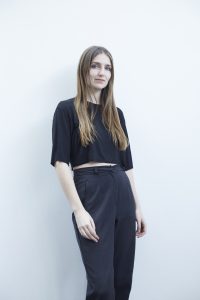 Maeve Brennan is a London-based artist and filmmaker. Her recent solo exhibitions include Listening in the Dark at Jerwood Space, London, and Mother’s Tankstation, Dublin; The Drift at Chisenhale Gallery, London, and Spike Island, Bristol (all 2017); and Jerusalem Pink, OUTPOST, Norwich (2016). She was educated at Goldsmiths, University of London, and was a fellow of the Home Workspace Programme at Ashkal Alwan in Beirut (2013 – 14). She received the Jerwood/​FVU Award 2018 and her film The Drift was screened at International Film Festival Rotterdam.