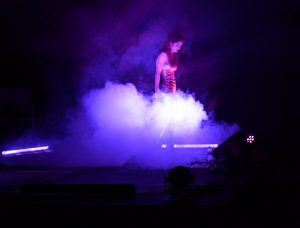 Lyra Hill is an artist, educator and radical priestess who creates films, comix and immersive multimedia events. She has screened, published and performed across the United States, as well as in Canada, Mexico, Scotland, England, Australia, Italy, and in Athens, Greece, as part of documenta 14. From 2011 to 2014 she hosted, curated and produced BRAIN FRAME, the performative-comix reading series. In 2016 NewCity Magazine named her ​‘Best Urban Ritualist’. In 2017 she created MULTI CULT, the ritual variety show. She lives in Los Angeles where she teaches martial arts, self defence against sexual assault and workshops on compassionate authority.