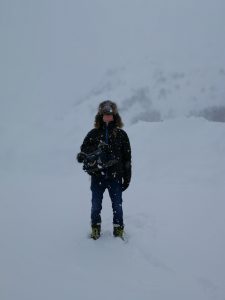 BJ Nilsen is an Amsterdam-based composer and sound artist. His work focuses on the sounds of nature and their effect on humans. His recent work explored the urban acoustic realm and industrial geography and mining in the Arctic region of Norway and Russia. Nilsen co-edited the book and CD The Acoustic City (JOVIS, 2014). His albums The Invisible City (2010) and Eye of the Microphone (2013) were released by Touch and Massif Trophies and Terroir (both 2017) by Editions Mego. He collaborated with filmmaker Karl Lemieux on the audiovisual work unearthed (2015) – which was presented at Sonic Acts and in the festival publication The Geologic Imagination – and again in 2017 on Yujiapu. Nilsen’s original soundtracks have been featured in theatre, dance performances and film in collaborations with Chris Watson, Jóhann Jóhannsson, Stilluppsteypa and others.