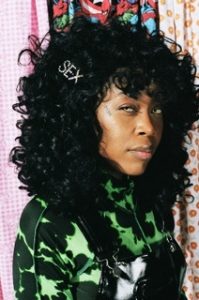 Bbymutha is a rapper from Chattanooga, Tennessee, whose lyrics are equally dark, witty, unforgiving and smart. You might have heard her tracks with collaborators LSDXOXO and Joey LaBeija, blending emotional release with venomous lyrical daggers. Her sound is as genre-defying as her lyrics are woman-positive. In the Bbymutha universe (a.k.a., The Mutha Land), women are allowed to be and celebrated for being sexual, vulgar, ambitious and savvy. Following a stellar series of self-released mix tapes, Bbymutha’s 2018 standout EP, Muthaz Day 3, sees her joining a new wave of underground female rappers, challenging a still male dominated genre with genuine swagger.