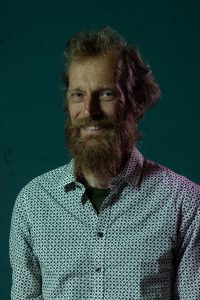 Arie Altena is an editor, writer and researcher who works in the field of art and technology. He is an editor at V2_​in Rotterdam, and works and lives at Marci Panis in Amsterdam. As part of the Sonic Acts team, he co-organised Sonic Acts Festival (2004 – 15), the Kontraste festivals (2011 – 13), and co-curated the Dark Ecology project (2014 – 16). He is the author of Wat is community art? (2017) and he edited several Sonic Acts publications, such as The Poetics of Space (2010) and The Geologic Imagination (2015). His interviews with artists are published in the Sonic Acts publications, and he occasionally lectures at arts academies and universities. He is currently a member of the advisory board of the Dutch Foundation for Literature and the jury for the Witteveen+Bos-Art+Technology Award. He studied Literary Theory and has worked as an editor for a.o. Metropolis M, the Dutch magazine for contemporary art, and Mediamatic Magazine.